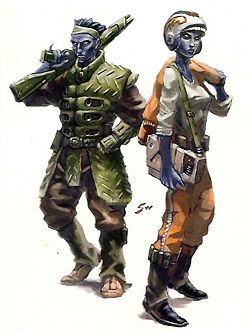 Note: As near-humans, if you wish to play a Chiss, choose 'Human' in chargen.

Chiss are regarded as alien, but biologically, they have a lot in common with Humans. The Chiss bear three obvious differences in that their skin is a shade of blue, ranging between vivid blue and blue-grey colouration; their hair is always midnight blue-black; and their eyes glow red, the brightness dependent on factors such as emotional state and density of atmospheric oxygen. It is speculated that these noticeable features are merely due to the environmental factors of their frozen homeworld, Csilla, and that genetically Chiss hardly differ from the common Human at all. They may have originated from an offshoot colony of Humanity in the distant past.

Chiss do have an accelerated metabolism relative to Humans. This gives them a typically lean physique and lends them a higher average body temperature. As well, they are considered having matured at a young age of ten to twelve. Other than these, there are no major physiological differences between Chiss and Humans. They may even be genetically compatible and able to breed, but the isolation of the two species from each other for so long means this is yet to be determined.

The Chiss homeworld of Csilla is located in the Unknown Regions, far from the commonly traversed routes of the Core and Rim. Because of this divide, Chiss society developed entirely independently from the other known species.

The most obvious aspect of Chiss society is an emphasis on adherence to conformity and consistency. The Chiss Ascendancy is founded on millenia of unbroken history, a unified spacefaring nation with no major external enemies and no major internal conflict. All Chiss are expected to serve the Ascendancy faithfully and according to the ways dictated by the Ruling Families.

Chiss society is largely defined by affiliation to these families and bloodlines. In fact, every Chiss can trace lineage to one of the Ruling Families and how close the relationship is has a large factor in determining the individual's status. However, bloodlines are not absolute. An aspiring Chiss can serve in the Ascendancy military and become a 'merit adoptive' of one of the Ruling Families. After service, those of sufficient ability are granted permanent status in their respective houses.

Cunning, courage and discipline are favoured traits. Those Chiss who excel in these are the most likely to do well in the Ascendancy in whatever path they choose.

The Ascendancy has little information about the Republic and vice versa. There has been no officially recorded contact between the two interstellar nations and the only noticeable contact with Chiss is in the form of the few travellers that leave Ascendancy space to visit the Rim and Core.

Retrieved from "https://darkhorizons.fandom.com/wiki/Chiss?oldid=13941"
Community content is available under CC-BY-SA unless otherwise noted.